In Yonkers, NY, the American Dream Still Lives – For Now

Granville Williams was a young man when he left his home in Jamaica and moved to the United States for a better life.

He brought with him the skills of a self-taught mechanic fueled by natural curiosity and a willingness to learn.  He signed on at the Domino Sugar Refinery in Yonkers, N.Y., back then as a laborer.

But Williams knew he was destined for a bigger job. He started off sweeping floors and working in packaging. Today, he is the mechanic over the massive machines that spin sugar inside the historic refinery on the banks of the Hudson River. 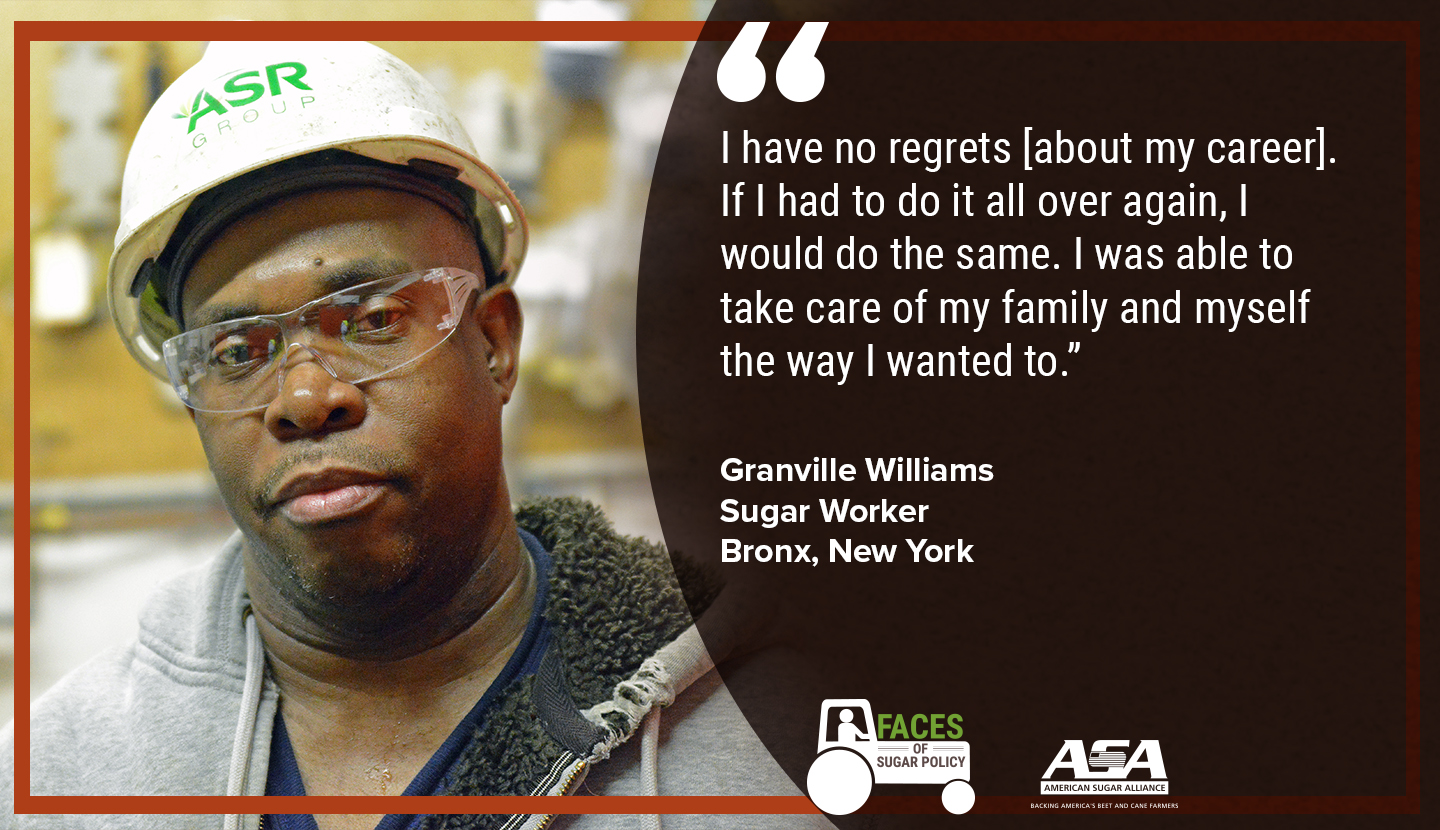 “I have no regrets,” he says while working in his immaculate shop deep inside the refinery. “If I had it to do all over again, I would do the same thing again. I was able to take care of my family the way I wanted to and take care of myself.”

The refinery originally opened in the late 1800s and has been operating continuously since 1938. Since then, generations of New Yorkers have raised their families on the good-paying jobs it provides.

It has also provided opportunities for families seeking a better life in America.

The American Sugar Alliance caught up with three of those workers as part of its ongoing series documenting the lives of the men and women who work in the sugar industry. The series is aimed at bringing their stories to the public, and Congress, as lawmakers debate the 2018 Farm Bill.

They are represented by the International Longshoremen’s Association Local 1 Stevedores, International Union of Operating Engineers Local 14, 15 and 30 and United Service Workers Union Local 74.

The union history is proud and strong – giving workers like Williams a chance to move up.

“[Domino Sugar does] a lot for the community because there’s a lot of workers that live in Yonkers that work here,” he says. “And, also, employees that live as far away as Long Island and Connecticut that work here and even further. If the job wasn’t good, I don’t think they would travel that far for it. They would find something much closer. So, I think it’s a very good job.”

On the other side of the refinery, Walter Aucaylle scans the conveyor belts that move 3,000 cases of brown sugar a day. His job as a packaging engineer fulfills a childhood dream of working with machinery – one he could not realize back in Peru. He’s on track to become a manager. 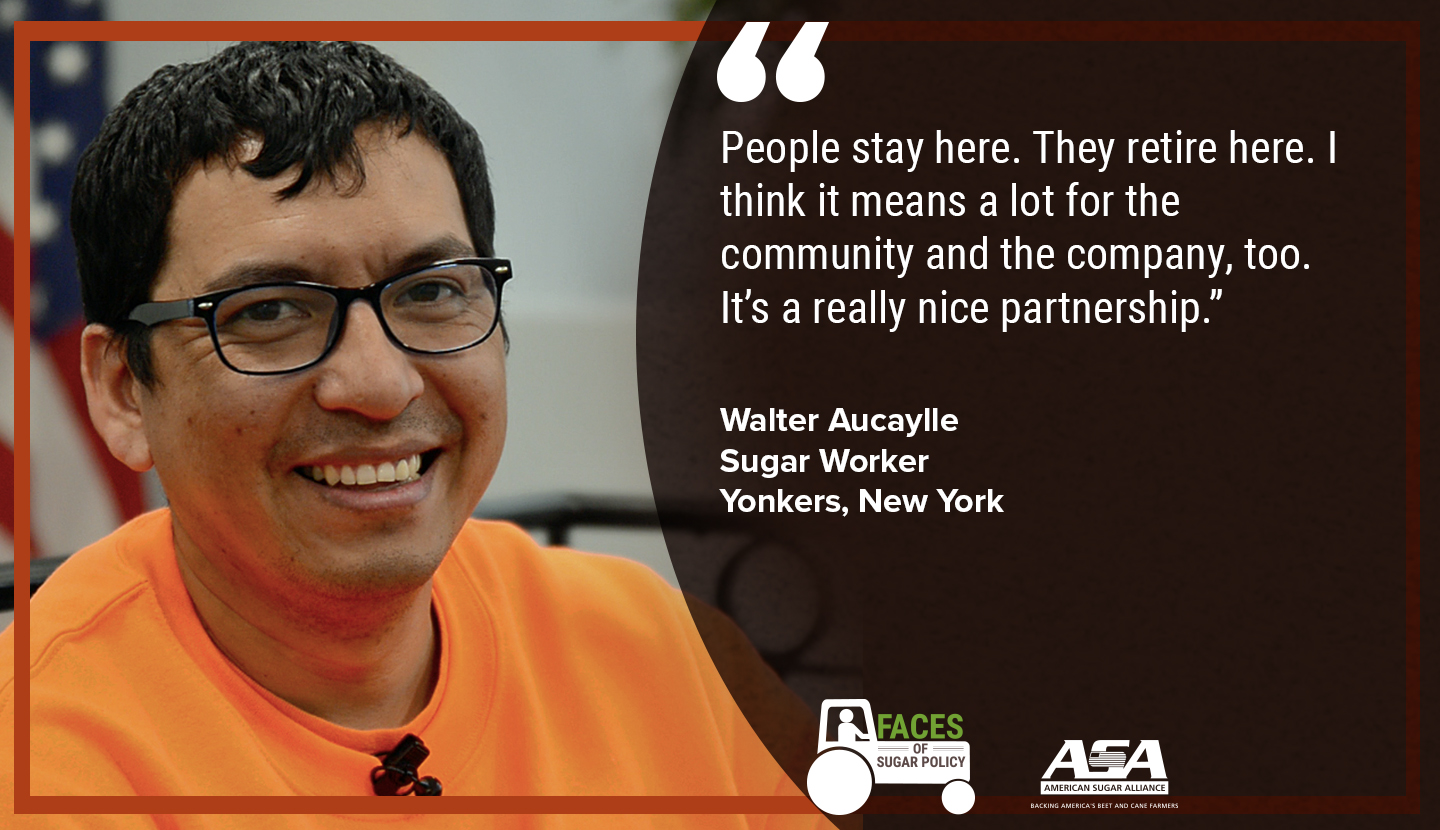 “The job that I am doing right now as an engineer/manager is really helpful for me,” he says. “It’s given me insight to not only understand things from an operations perspective, but more on a manager level. Looking at budgets. Looking at the bigger picture.”

It’s that kind of opportunity that creates the dedicated workforce on which Domino Sugar, owned by ASR Group, relies to refine 4.2 million pounds of raw sugar a day. The sugar goes to consumers in the form of Domino® Sugar-brand products and to industrial, specialty and food-service customers nationwide.

The operation means millions to the area in payroll, property taxes and vendor relationships.

And, the refinery supports the community beyond providing jobs and a tax base. It backs programs such as the Beczak Environmental Education Center, the Hudson River Museum and the Yonkers Partners in Education – to name a few.

“The refinery is a source of pride,” says Refinery Manager Matt Shue.

Harkirtan Singh understands that pride. It’s a feeling he carries with him every day.

Like Williams, he started as a laborer 30 years ago after moving to the U.S. from India. Today, he operates the refinery’s electrical powerhouse behind a bank of computer screens in a room filled with gauges, knobs and dials.

His job allowed him to send his wife to college to become a nurse practitioner. He’s also paid for college educations for his three children. His youngest daughter is pursuing medical school. 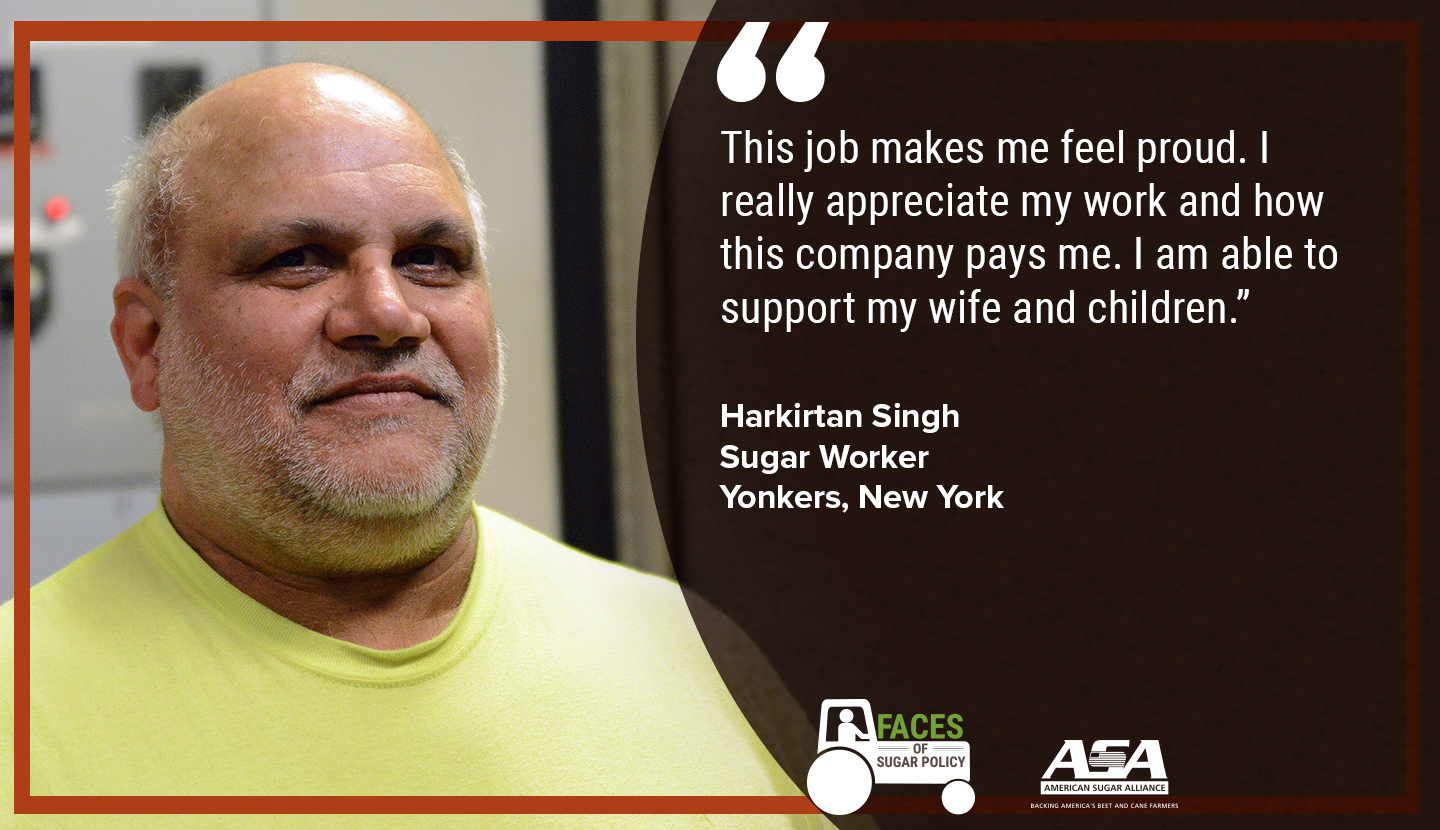 “She wants to be a doctor,” he says. “Hopefully, God willing, she will be a doctor one day. It makes me feel proud. Really proud of my children and my wife. And I really appreciate this job…. I’m able to support them.”

This is the American dream. But the dream of workers and farmers in the sugar industry are under attack on Capitol Hill.

Opponents of agriculture want to gut the no-cost U.S. sugar policy in the Farm Bill. They want to flood the market with highly-subsidized foreign sugar instead of providing a level playing field for American sugar producers.

The move might help a handful of candy companies further cut costs, but it would be a hit to sugar producers who are already dealing with prices that are lower today than in 1980.

Watch these stories and more on facesofsugarpolicy.org.