Back in 2007, raw sugar prices on the world market averaged just shy of 10 cents per pound.

To put that figure into perspective, the global average cost of producing a pound of raw sugar was more than 17 cents.

Yes, the price was low and producers were losing money on every pound of sugar sold. But amazingly, it was up more than 10% from the 8.8 cents per pound it averaged the decade before.

Then, things changed. Major subsidized exporters had short crops and shipped a lot less. By 2011, prices nearly tripled, shooting up to average 27.2 cents for the year.

Of course, that didn’t last long either. Prices plummeted 50% by 2015 as exporters ramped up production and sent prices back to an average of 13.14 cents. Yet, less than a year later they are moving back up again, settling above 16 cents last week. 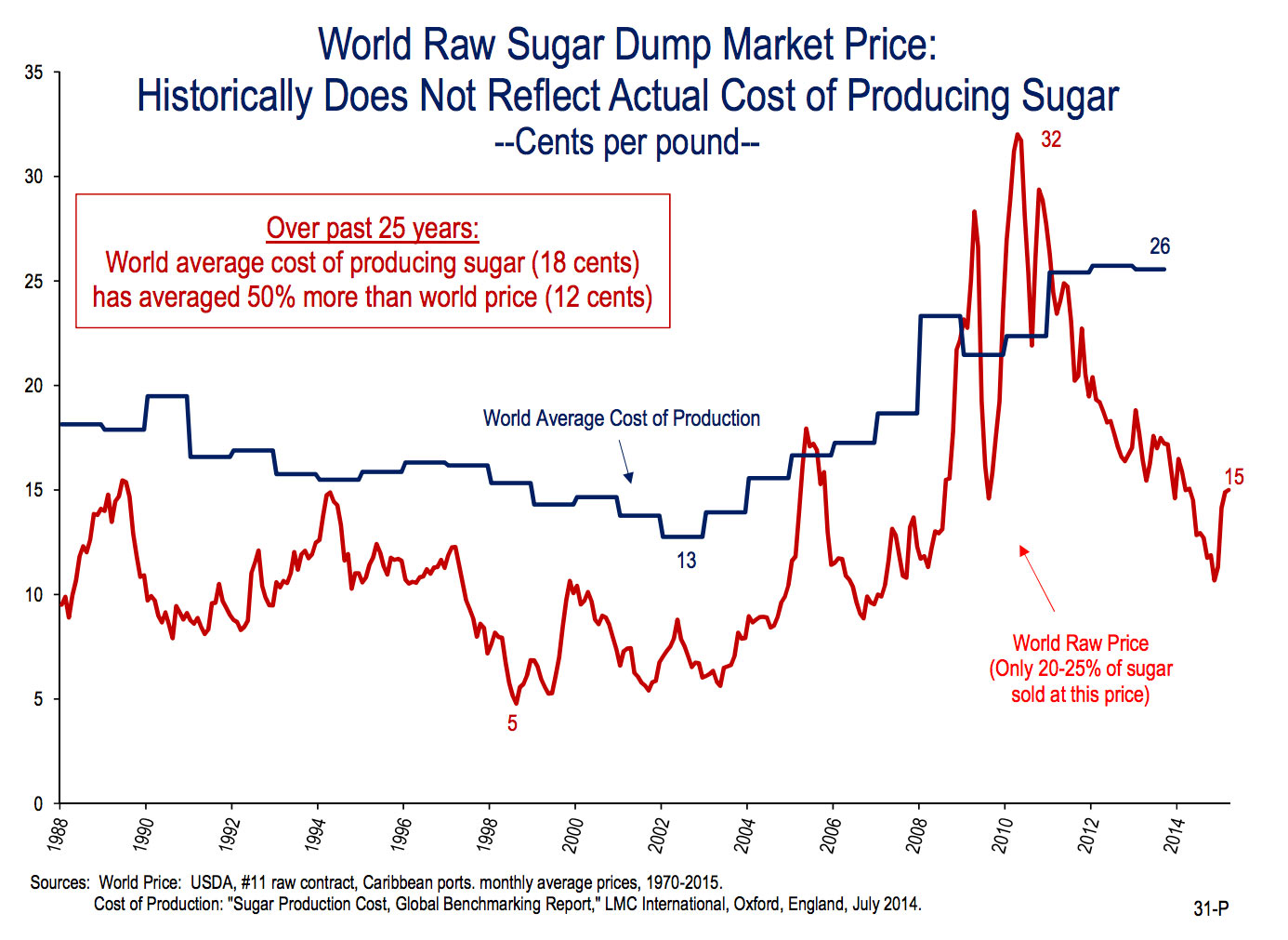 Such huge and unpredictable price swings are not typical of other crops, which is one reason sugar has been called the world’s most volatile commodity market. And making business decisions based on this yo-yo market alone, without government support, is impossible.

So what’s causing all of the turmoil, and what are sugar producers around the world doing to cope? The same answer applies to both questions: Subsidies.

The world sugar market is thinly traded and is comprised of surpluses that exporting countries seek to remove from domestic markets before it collapses prices at home. These exports are made possible by an array of subsidies and other governmental actions that have a tremendous impact on prices.

Brazil, for example, used $2.5 billion a year in subsidies and support to its sugar ethanol complex to grow an empire that controls half of global sugar trade. With that kind of market domination, every government action or planting decision sends prices sharply in one direction or another.

Then, there’s Thailand. Thailand subsidizes its sugar industry at least $1.3 billion a year, and is still making investments to expand production and exports, with encouragement from the government to shift the country’s rice acreage into sugarcane.

Last, but certainly not least, is India. WTO-illegal sugar export subsidies helped the country move from an importer of sugar to an exporter. India justified its subsidization by saying it was needed in times of low prices. Does that mean it plans to roll back all of its subsidies now that prices are climbing? Not exactly. AsReuters recently reported, “India seen holding off sugar policy change despite price surge.” The Wall Street Journal also quoted an Indian government official saying, “We will not deviate from our duty of farm welfare.”

It is truly a subsidized market right now. Even Europe, which undertook reforms of its highly subsidized sugar policy, will still provide its sugar growers an estimated$665 million a year after reform is completed in 2017.

So what can unwind all of the turmoil and inject some common-sense, free-market philosophies into this distorted mess? That answer is simple: End subsidies around the globe. And that’s exactly what U.S. sugar producers are supporting in the Zero-for-Zero sugar policy.